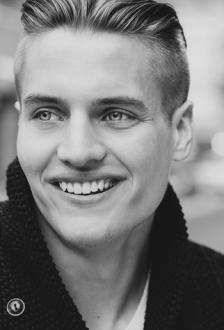 Robert Punchur is a comedian, writer, actor, model, host, entrepreneur, fitness professional and American Hero based out of NYC! Robert knew at a young age that he wanted to be an entertainer. Before he could read or write, Robert dictated musings to his mother. In third grade he self-published a short story and in high school he earned numerous scholarships and awards as a nationally-recognized student journalist. To balance these academics, Robert also spent 13 years dedicated to wrestling, an activity that he describes as a confusing blend of fighting and competitive cuddling. Along with some cool scars, the sport left Robert with an unrelenting work ethic and steadfast dedication to excellence in all endeavors. Always up for a challenge, Robert moved to New York City in 2011 to major in Politics, Philosophy, and Economics at The King’s College. While studying, Robert decided to indulge his secret passion for stand-up comedy. After hearing a crowd’s laughter for the first time, the small-town boy realized that his dream could become a reality. He supplemented freelance writing assignments with standup comedy gigs and, one semester later, Robert dropped out of college in order to master his craft. Despite this terrible mistake, Robert has been making a name for himself in the New York comedy scene ever since. He performs nightly at Broadway, New York, and Greenwhich Village Comedy Clubs. In 2014, he headlined Pittsburgh and Miami and in 2015 he performed internationally in Australia, Amsterdam and London. Robert also works on honing his improv skills at the Upright Citizen Brigade and The People’s Improv Theatre. In 2012, Robert was named one of the “Top Ten Hottest Rising Stars in NYC” by Comedy360Daily. On stage, Robert brings a fresh young American perspective to comedy with his clever humor and witty punchlines. A small-town background combined with classical education and NYC experience enables the multi-faceted performer to connect with all audiences. This has been proven time and again at corporate events, charity shows, private parties, clubs and colleges across the country. Still an accomplished comedy writer, Punchur has been published in Sparknotes.com, College Town Life, and The Empire State Tribune. His standup has been featured on ComedyTimeTV and Hulu’s Quicklaffs as well as in The Huffington Post, Washington Examiner, AM New York, This NY and more! In 2014, Robert displayed versatility as a performer by landing lead roles in the comedy short film Apeshit Bananarang and the HBO pilot Noir Nation. And he’s only getting started!