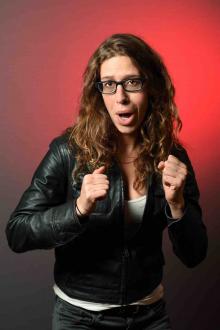 Michelle Slonim is a New York comic. Michelle has appeared on web-shows for Comedy Central and HBO and on SiriusXM Radio. She plays at late night at the Comic Strip, late night at Broadway Comedy Club, various produced shows at Carolines on Broadway and at indie bar shows throughout the city (many of which she produces, cuz you gotta create your own opportunities). Special guest performers at her shows have included Dave Attell (The Insomniac Tour, Comedy Underground) and Greer Barnes from the Chapelle Show. She trained in comedy and performance under the bright lights of the 6 train, skills she honed at the University of Michigan, Williamstown Theater Festival, as an apprentice to Lewis Black. She's really good at name dropping. She is a seasoned producer having worked on 24 Hour Celebrity Plays on Broadway and produced shows at Webster Hall and Le Poisson Rouge. For her Anti Valentine’s Day Comedy Show, she was featured in The Wall Street Journal, although as her mother pointed out, it was only on page two in the print edition. She is a member of the Friars Club.